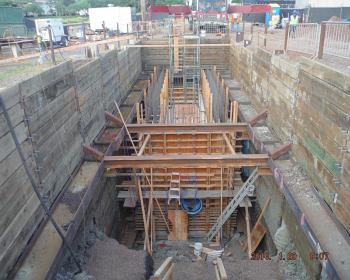 In September 2008, Aqua Engineers, Inc. was awarded a 50-year privatization contract by the U.S. Department of the Army for its wastewater system, which included the design and construction of the Aliamanu Military Reservation No. 1 Sewer Pump Station (AMR1 SPS) replacement.  The purpose of the AMR1 SPS Project was to a construct a new pump station to replace the existing station which was built in 1974 and, due to its age, was unreliable and had the potential to fail at any moment.  It was a race against time to get the new station built and in operation before the existing station was in jeopardy.  The construction contained a new trench-style wet well with three submersible solids handling pumps with a minimum total capacity of 6.1 MGD, as well as a new building facility.  The completion of this project provided the Aliamanu Military Reservation community with an upgraded and reliable sewage transmission system intended to reduce the potential of overflows or spills in the collection system and accommodate future military housing developments and facility expansions.