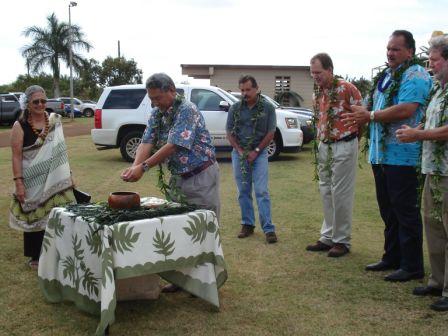 WAIMEA — Reliable expanded wastewater service opportunities, the creation of jobs for local contractors and the integration of new technology to provide more water as a resource are some of the benefits of the Waimea Wastewater Treatment Plant Expansion, Phase I.

Kaua‘i Mayor Bernard Carvalho Jr. touched on these points during the blessing and groundbreaking of the project, Friday afternoon, which featured Haku Aletha Kaohi.

“This is an excellent example of how the people of Kaua‘i are directly benefiting from federal stimulus funds,” Carvalho said. “We are pleased that Briant Construction was awarded the contract for the Waimea WWTP project via a competitive proposal process. We look forward to the job opportunities this project will provide our residents along with future economic development on the Westside as a result of the increased capacity of the treatment plant.”

Ed Tschupp of the county’s Wastewater Division said the plant reached its capacity in the 1990s, resulting in denying permits for people requesting additional dwelling units on their properties.

“This was a bottleneck to development on the Westside,” Tschupp said. “The expansion project doubles the capacity of treatment and with the added improvements, we’re upping the quality of recycled water to R-1, the highest level, which can be used for unrestricted water reuse applications like crop and open space irrigation.”

This will reduce the county’s reliance on potable water for irrigation.

Tschupp said in addition to looking at wastewater as an added water resource, the expansion will take advantage of photovoltaic systems to minimize its carbon footprint in the community.

A lot of the work for the expansion project was already done when federal stimulus monies became available, Tschupp said.

With the help of the Kaua‘i County Council, the project went to bid.

“We were getting nervous,” said April Matsumura, Clean Water State Revolving Fund Program engineer from the state Department of Health Wastewater Branch. “This is the most complex of seven projects using stimulus funds, but this project is especially important to us because it is our Glamour Green project which incorporates solar power and water reuse.”

Matsumura said along with Maui’s pump-efficient project, the Waimea WWTP expansion project enabled the DOH to allocate 42 percent of stimulus funding to green projects, earning the department an award for exceeding the 20 percent goal for green projects.

“The project represents the future hope for Westside residents through job creation and sustainability, enabling our residents to pay their bills,” said state Rep. Roland Sagum, D-16th District. “The project enables Kikiaola Land Company to implement its community master plan which is recognized and accepted in the Kaua‘i General Plan.”

A design-build approach will be used for the project, during which, the plant will continue to operate while construction work on the expansion project takes place.

The project is funded by $7.5 million in federal ARRA stimulus money with the roughly $9.2 million remainder being funded by state revolving funds.

Eassie Miller, president and CEO of Aqua Engineers, thanked the county for being selected.

“We’d like to thank the County of Kaua‘i for choosing us to help invest in the Waimea community,” Miller said. “This project will bring jobs to the community, save the county money and conserve precious potable water. We see it as a ‘win-win’ for the community and the environment.”

Briant Construction has participated in several county projects in the past five years, including the Lihu‘e Wastewater Treatment Plant upgrade which was dedicated in October. It also completed the Po‘ipu Water Reclamation Facility upgrade, a similar project to the Waimea WWTP project, in the private sector.